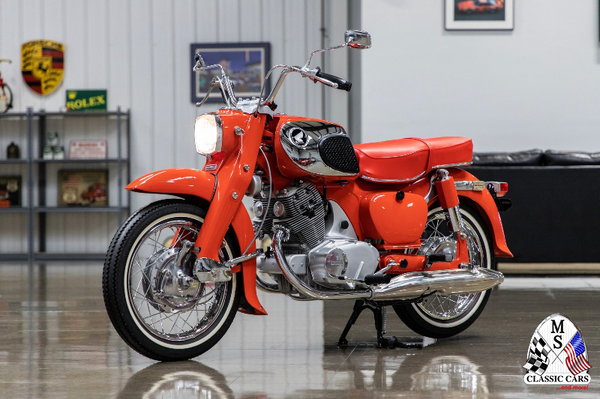 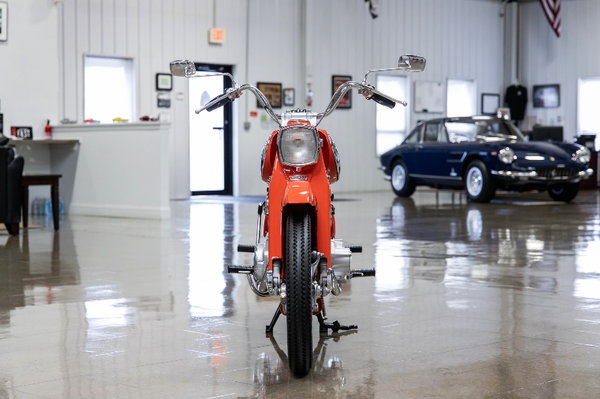 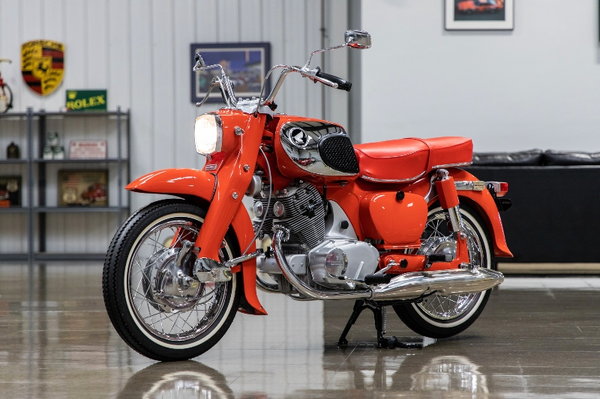 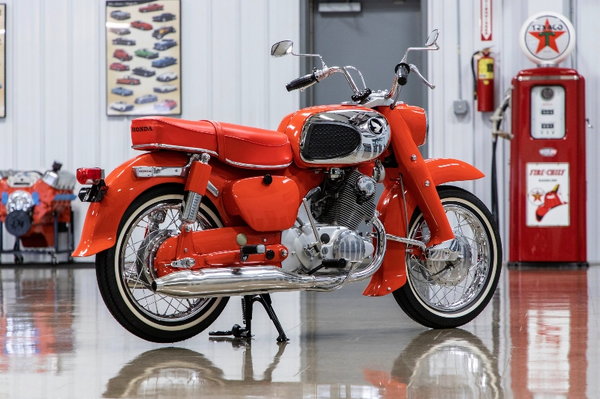 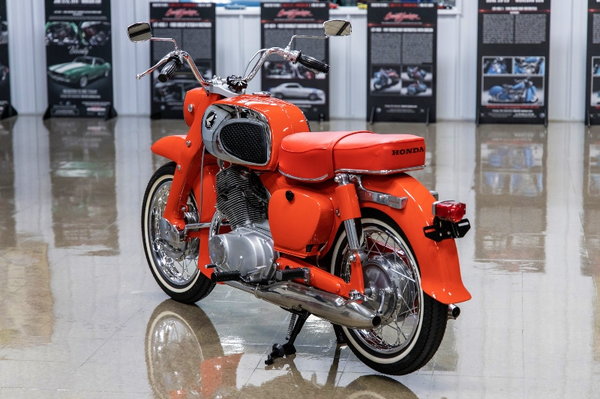 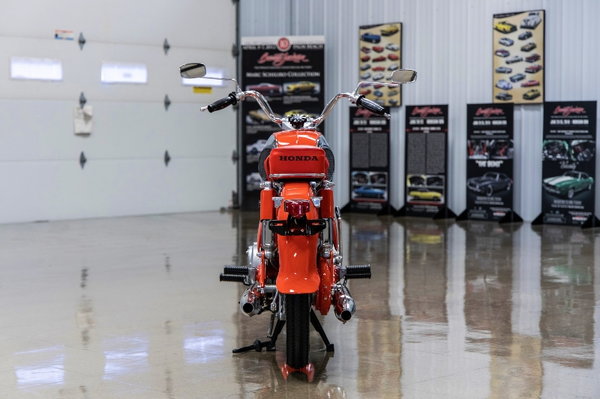 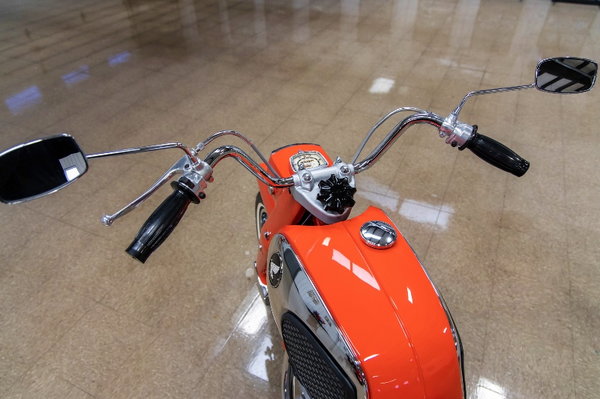 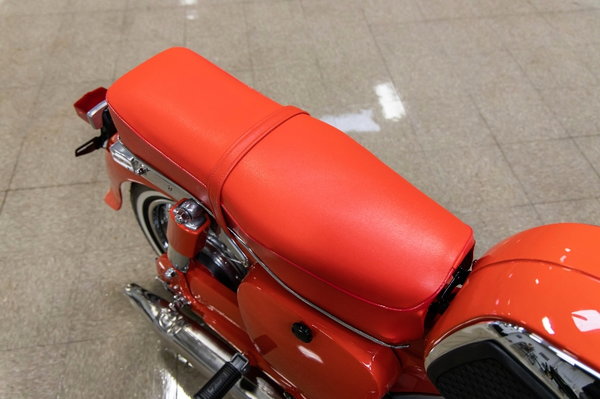 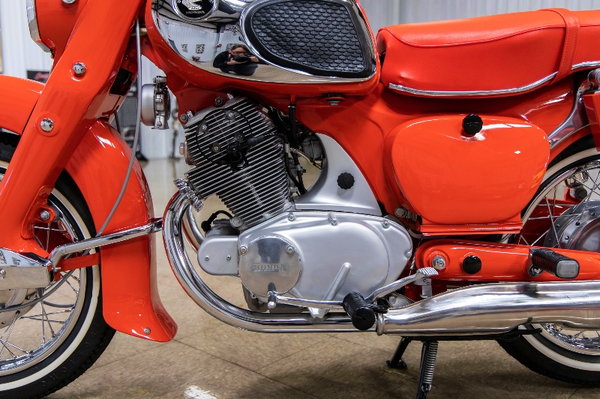 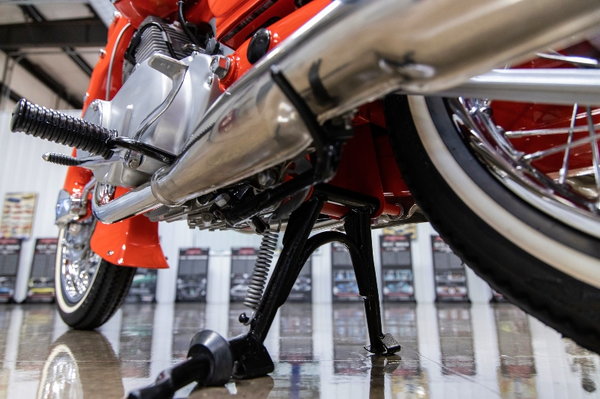 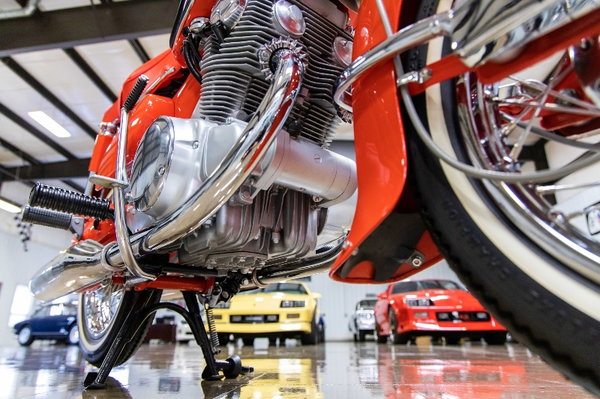 **THIS MOTORCYCLE IS CURRENTLY SELLING LIVE AT NO RESERVE ON A BRING-A-TRAILER ONLINE AUCTION. THE AUCTION END DATE IS WEDNESDAY, NOVEMBER 25 AT 4:47PM EASTERN TIME.**

One of the best!

Restored by well-respected Bjorn Golberg who won First Place at the Keeneland Concours in Lexington, KY in 2016 with a white 1965 Honda CA77 Dream Touring 305 that was later purchased by MS CLASSIC CARS.

Show quality restoration completed in December of 2019 and has only 3 test miles.


This spectacular 1965 Honda CA77 Dream Touring 305 is simply one of the best restored examples known to exist. It was professionally restored by well-respected Bjorn Golberg who won First Place at the Keeneland Concours in Lexington, KY in 2016 with a white 1965 Honda CA77 Dream Touring 305 that was later purchased by MS CLASSIC CARS. This show quality restoration was completed in December of 2019 and has only 3 test miles. Some photos of the meticulous restoration are included. The matching numbers 305cc engine was completely rebuilt and runs beautifully. This machine is a piece of rolling artwork. Clean title included.

As quoted from Hagerty,
“History of the 1965 Honda CA77 Dream Touring 305
Sold throughout the 1960s in the United States, the C-series Dream “represented all of Honda’s latest technological advancements,” according to Honda historian Aaron Frank. With elaborate touring bodywork, it wasn’t necessarily the American public’s idea of a motorcycle, so clever marketing was required to reach new riders. The Dream name derived from the 1949 Model D, a 98cc two-stroke. “It’s like a dream!” one enthusiastic observer proclaimed at its unveiling. The first C-Series Dream appeared in Japan in 1957, and the rare CS76 Sport 300—which had upswept twin pipes, was Honda’s initial offering in the States.

Imported from 1960 to 1969, the CA77 Dream became the mainstay. With an air-cooled SOHC 305cc parallel twin with a single 22mm Keihin carburetor, it produced about 23hp at 7,500 rpm, propelled the bike to 85 mph, and delivered better than 50 mpg. A bargain at $595, the Honda Dream was easy to operate thanks to electric start, distributor ignition, and a smooth four-speed transmission with rotary design that allowed direct fourth-to-neutral shifts. The so-called “monobeam” chassis of stamped steel and the covered front forks of a leading link design made the Dream reminiscent of contemporary Triumphs with “bathtub” styling. The “toaster” tank had chrome side covers, large black kneepads, and vivid Honda emblems. The bikes were available in red, blue, black or white and sometimes had matching saddles. Under flared, deeply valanced fenders, the 16-inch wheels often wore whitewall tires. By 1965, Honda had become lodged in America’s mind, and the Dream had much to do with that.”

This 1965 Honda CA77 Dream Touring 305 was purchased by a gentleman in New Lenox, IL on June 14, 1998 as indicated on title. It was purchased by Bjorn Golberg in November of 2018. When it was purchased the motorcycle was original but mostly disassembled. It was the perfect candidate for a restoration. Bjorn Golberg is well-respected for doing high quality restorations. He won First Place at the Keeneland Concours in Lexington, KY in 2016 with a white 1965 Honda CA77 Dream Touring 305 that was later purchased by MS CLASSIC CARS. This bike went through the same process as that one had and was completed in December of 2019. It only has 3 test miles since completion. As quoted from Bjorn himself, “This classic is more than just beautiful – it runs as good as it looks and can be ridden if desired.”
This machine is in absolutely beautiful condition from top to bottom. It is definitely in concours show quality condition throughout. As the photos document it was completely disassembled during the restoration. It was then meticulously reassembled. This bike is the definition of a nut and bolt restoration.

The body was media blasted and then sprayed in epoxy primer. The body was then painted in its original color of Red. The color mixture was made to look as close the factory color as possible. This color looks beautiful on this bike with its art deco styling. The PPG paint is high quality and has been detailed to a brilliant shine. All the chrome work was redone by well-known Meclec Metal Finishing located in Fresno, CA. All of the parts were restored or replaced such as the handle bars, black grips, levers, cables, dual mirrors, gas cap, emblems, etc. The front headlight, rear brake light, horn, electric start and original speedometer are in working order. The new red seat cover was wrapped around the detailed original seat frame. The bike sits on the original wheels which were completely restored. The work included repacked wheel bearings, re-lacing, re-chroming and new spokes. The wheel hubs and brake panels were polished. New rim strips and tubes were added. The wheels were wrapped with in the correct Firestone Deluxe Champion 3.25-16 narrow whitewall tires.

The original 2-cylinder, 305cc/23hp engine was completely gone and runs excellent. The 4-stroke engine runs on pump gas no necessary additives. The cylinders were re-honed. It has new piston rings, seals and gaskets. The valves were also lapped. All of the engine parts were cleaned; bead blasted, and painted Honda silver where appropriate. The carburetor was rebuilt with new points and condenser. It’s equipped with NGK spark plug wires. The fuel petcock was rebuilt. A new correct JB-2 battery was installed. This engine starts by the electric start or kick starter. The engine breathes out beautiful chrome header pipes with new exact replica mufflers that sound awesome. The original 4-speed transmission was inspected, cleaned and any worn parts were replaced.
View Full Description

Apply for low rates with LightStream

Ship your purchase with uShip